When You Can't Bear Your Job, Read This

From high above the Wapiti Valley…

It’s a crisp 43 degrees outside the log cabin this morning. Perfect jeans and flannel shirt weather. The Border Collie coils near the fire and the coffee mug sloshes from my last slurp. 6:33 am, wife still asleep, the house so quiet I can hear the clock tick.

Pitch black outside, I imagine the neighborhood Grizzly roaming around my porch. A neighbor emailed a photo of the bear in his yard yesterday. The bear normally stays deep within the Shoshone National Forest but there is no fence on the border between my yard and the forest. Bears do what bears want to do. Who’s going to stop them?

It occurs to me that I am finally living life as a Grizzly within my human species. I do what I want to do. There never was anyone to stop me. There were only small signs along imaginary borders with no fences. Once I crossed the border, I was stunned at how many limitations were exposed as illusion.

I take another slurp of coffee.

I reflect on 40 years of income generation. Forty eight if you count the newspaper routes I ran from age 11. How many decades did I waste dancing to the tune of someone else’s dream?

“Waste” is the wrong word. There is value in every activity, even if its only value is revealing what you don’t want to do. But man, I wish I’d been more aware, more determined and more courageous sooner.

But I’m here now. Been here since 2009 when we sold the trolley tour business and bought the second mobile home park. It was an early, 95% retirement at age 52, just managing our park managers.

Eight years later, it’s still as magical as I dreamed it could be. Passive income. No work schedule. No commute, no costumes, no kooky bosses or coworkers. A log home near Yellowstone National Park.

I reach for the mug, turn from the screen and admire the 20 foot stone fireplace.

When I was young, I had no idea it was possible to just BUY an early retirement. No one ever told me. I didn’t know what I didn’t know, so it never even occurred to me to look for income alternatives beyond jobs or starting businesses.

The people who influenced me in those early days meant well. They were just sharing what they knew. But they didn’t know that jobs and starting businesses were the hardest and least effective ways to generate income. They didn’t yet realize that TIME is far more valuable than money, and that jobs and starting businesses required trading massive amounts of time for money.

Forty years later, it's easy to see that was a bad, bad trade.

I also fell for the myth that retirement is only possible after working and saving for decades until age 65. Compound interest was described with such glowing reverence that I imagined it was first published in Genesis. A man only has to work his entire life, the verse said, squirreling away a portion as he goes, and time alone, will propel him to a nest egg so large that its interest will then richly fund his life until he slips through the pearly gates with a smile on his face.

Whoops. No one could’ve foreseen banks and governments colluding to purposely decimate interest rates, maximize inflation and impose unfair taxes and insane healthcare costs right at the precise moment workers were ready to harvest their lifetime of savings.

Well, no one except those few who had proactively studied history and human nature.

The clock ticks. Dawn seeps through the highest chalet windows. The dog stirs, then settles back asleep.

I think I was about 40 when a book gave me the epiphany that super-charged my life. I didn’t need to save a massive nest egg to retire, I just needed enough monthly, passive income to exceed the amount of my monthly bills. Once I achieved that, I’d be free of jobs and work schedules forever.

Soon after, I gained a second epiphany. I realized I didn’t have to create this passive income myself. I could just BUY an already-existing business or income property that had a manager.

And then, the final tumbler clicked into place, illuminated the pathway and cued the harps. I didn’t need to amass huge savings to buy one of these properties. All I had to do was put the deal together in a way that satisfied the banker and the seller.

I thought it was the deal of a lifetime. But then other deals followed, easier than the first, revealing that the magic did not reside in the deal, but in the dealmaker. *I* was the element that had been missing during all those decades working for others. Once I awoke to these concepts, the concepts began working for ME.

Magical mornings like this are now common. Gratitude attracts them as effortlessly as breathing. Fulfillment, love and flow follow. I love writing during these magic mornings. I want others to feel what I feel.

I open the picture window blinds and gaze upon the valley floor, 1,400 feet below. I grin at overnight snow that painted 12,000 foot mountains surrounding the valley. I mumble a prayer of thanks.

I no longer worry about paying bills or stock market crashes or crazy bosses or outliving my money.

Today, I only worry about being eaten by Grizzly Bears.

It was a good trade.

P.S. What was the book that super-charged my life?

"Rich Dad Poor Dad: What the Rich Teach Their Kids That the Poor & Middle-Class Do Not" by Robert Kyosaki 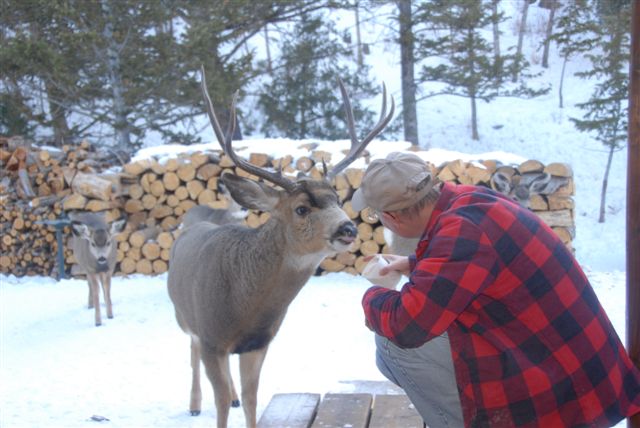