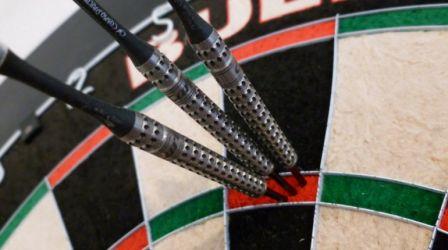 When you spend four years trying to accomplish something, it becomes a pretty big deal when it finally falls into place.

So when my third dart sunk into the triple 20 rectangle just like the two before it, earning a 180 point throw, the highest possible in darts, my arms instinctively rose overhead.

No one witnessed it. It wasn't captured on film. But it held the best reward of all - I knew I'd done it.

Darts isn't a passion or anything, it's just something to do while thinking. Like lawn-mowing, it's a tremendous idea generator.

Throwing darts is so much like life. I admit that to keep things interesting, I sometimes play a mental game while flipping those darts. I call it "annual income." By putting the heat of determining a year's revenue on the results of three throws, I tend to concentrate more. And develop strategy.

Significantly, on the pie-shaped dart board, the highest space is in the 20 slice where the inner tripling ring leaves a half inch space. Worth 60 points, it's even higher than the 50-point bullseye. But laying on each side of the 20 slice are the lowly 5 and 1 spaces. Miss by a hair and you've destroyed your point total.

In my quest for the perfect score, there were many times I'd sunk the first two darts into that elusive 60 point slot. But the third always went astray. I explored many strategies to get that reluctant last dart to follow.

First I tried stopping. Deep breath. Concentrate. Focus only on the tiny square. Let the rest of the board fog out.

I'd choke every time. Sometimes by a 1/16 of an inch - triple one instead of triple 20. Or I'd hit the wire that divides the slices and the dart would fall to the ground. Rejected. Nothing.

So then I tried NOT stopping. Just keep throwing. Keep the rhythm. My body is a machine I'd tell myself. It knows how to repeat the same motion. Let it throw itself. Take your mind out of it.

So then I tried raising the stakes - I'd generate a crowd for that desired third shot. GIRLS! DAD'S GOING FOR A PERFECT THROW! COME QUICK!

So over time, I detached from the drive to achieve a perfect score and found myself looking for life parallels instead.

Just like life, a 16th of an inch on either side of success lies the 1 and 5 slices. Life moral: shoot for the top and miss, be prepared to end up with almost nothing. Until you shoot again.

The high-scoring 19, 18, and 17 spaces are also positioned with lower scores around them. Moral: The higher your aspirations the higher your risks.

But once you reach the "average" numbers of 14 and lower, the neighboring spaces become more forgiving, holding higher - yet still average numbers. In fact, 14 is surrounded by 9 on one side and 11 on the other, making it the safest cluster to shoot for. Moral: Shoot for average aspirations, receive average results.

I can't count the number of times a first dart would score only one point and then the remaining two would hit 20 or 60. Moral: Your first result is not your best result.

When I first started throwing for the 60 point slot, my scores took a major dive. The neighboring 5 and 1 point slots sucked up more darts than I could total. My average scores fell from 50 points to barely 20. Moral: Leave the familiar and for a time you won't do as well.

But over time, by consistently shooting for the board's top space, my scores rose higher than ever before. 100 point scores became common. Hit just one out of three in the 60 slot and you've earned a dozen hits in the 5 slot. Moral: One good project can better a ton of little paychecks.

After the first two darts sunk into their target during that final throw, there was no stopping. The perfect throw wasn't even on my mind - I just enjoyed throwing the darts. No pressure. No intense concentration. Just another dart. Until it buried itself 60 points deep next to the others - providing my first perfect score - and perhaps the best moral of all.

Enjoy what you're doing and the results will take care of themselves.